A Survivor Gives Back 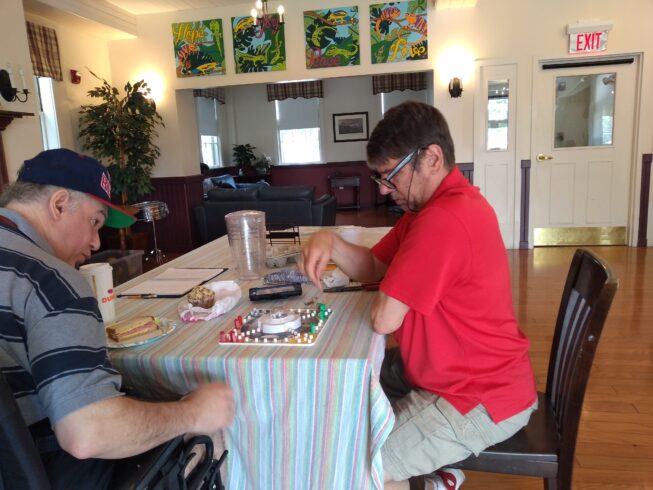 Steve and Tim enjoy a game of Trouble

Tim Coughlin was a successful diagnostic engineer working in telecom when he was hit by a truck while crossing a road to get a sandwich.  He doesn’t remember the accident, but his wife tells him he woke up 10 days later in Mass General.  Besides his other injuries, he suffered a traumatic brain injury.

“I was like the movie Regarding Henry,” says Tim.  “I had to re-learn how to walk, talk and feed myself.”  15 years later Tim leads an active life, volunteering and working where he can.  “I worked for startups before,” he says, “and ten-hour days were routine.  I can’t do that any more.  And I forget a lot of stuff.” 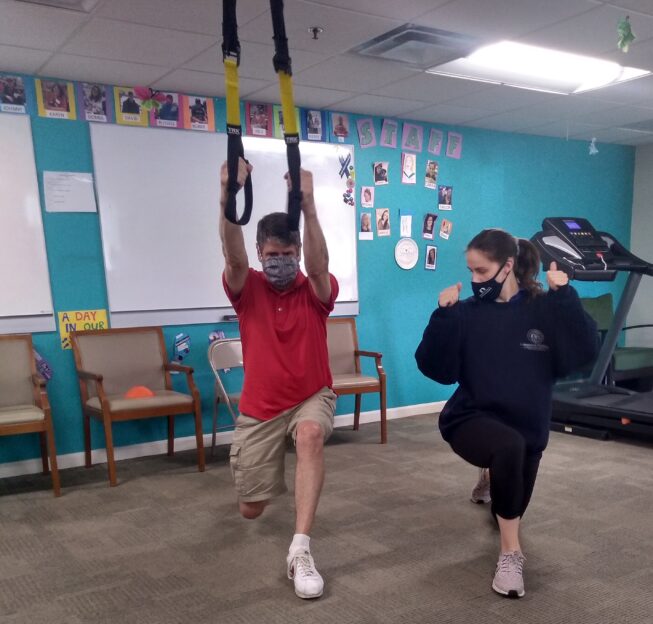 Tim worked for Home Depot, which runs a vocational training and job placement program for individuals with disabilities, then for Stop and Shop, where he now works four days a week.  “I like bagging groceries,” he says. “I like the people.  They’re friendly and I like to talk to them.”  Tim’s engineering background helps him understand mechanical things.  Until the Lexington Senior Center closed last year due to Covid, Tim volunteered there in a household goods fix it shop.  “They say they are reopening soon,” says Tim, “and the director has already contacted me about coming back.” 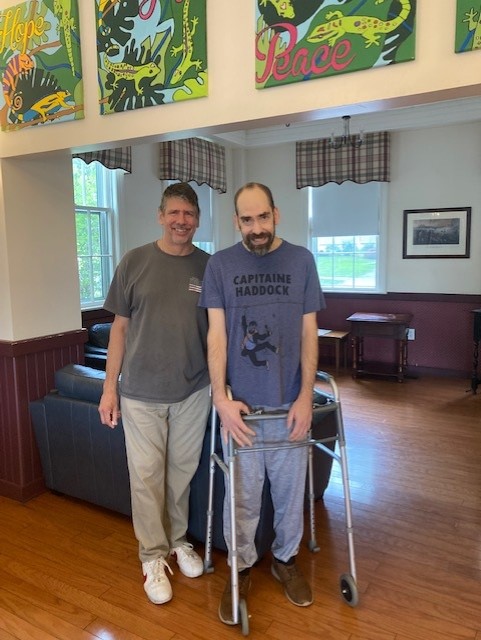 Before his accident Tim was also a musician, playing the drums and bass.  He’s now learning to play guitar.  “The guitar players get the dates,” he says with a grin.  “I’d also like to learn to play the piano.”

Tim also volunteers at Douglas House, providing social connection, conversation and activities with residents.  Whether he’s playing Trouble with Steve or going for coffee with Jeremy, Tim’s smile is a regular fixture at Douglas House on Tuesdays.  While volunteering he learned about the Neuro-fit program and is now exercising twice a week in that program as well.  “I like people,” he says, “and I enjoy interacting with the residents here.”

Tim has developed a special bond with Jeremy.  “He’s like a best friend,” says Jeremy.