Neuro-Fit from SLI – a Life Saver for this Survivor 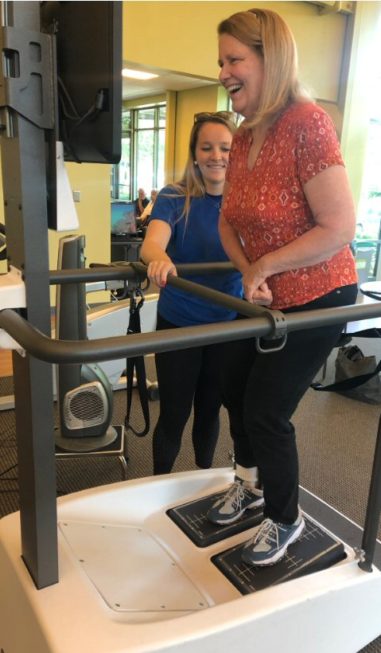 Jeanne on the KINESIQ with assistance from Emily

Jeanne and her husband Tom were retired and traveling the world.  Jeanne worked in the lab at Beverly Hospital but switched to full-time homemaker to raise their daughter Kate. Tom was a physicist.  In 2017 two weeks after arriving home from a cruise Jeanne suffered a severe stroke.  It left her with paralysis on her right side and ataxia, a lack of voluntary muscle movements.  She also suffered aphasia, the loss of ability to understand and express speech.

Since her stroke Jeanne has worked hard on improving, starting outpatient rehabilitation with speech and physical therapy. In July 2018, a Spaulding Rehabilitation Occupational Therapist recommended SLI’s Neuro-Fit assisted exercise program offered at the Center for Balance and Wellness at Gordon College, which she started attending twice per week.  In addition to exercising with one-on-one assistance in the exercise program Jeanne was receiving speech therapy twice weekly.

Through hard and consistent work, Jeanne has improved her physical and speech capabilities.  “It’s sometimes three steps forward and one step back,” says Tom.  “But Jeanne has seen consistent improvement.  She can now write her name, address, birthday and her pets’ names.  She has even started singing along with the radio.”  When Jeanne cannot recall the right word, she will substitute.  For instance, “I call them ‘rats’,” says Jeanne through Tom, which Tom explains refers to the squirrels that visit their bird feeder on the deck. 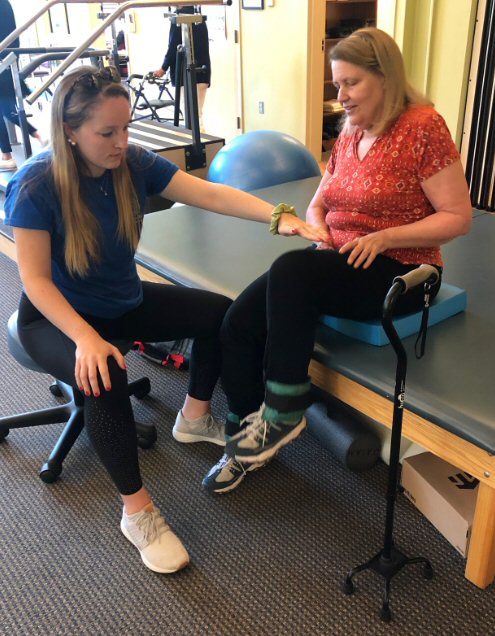 “We love this exercise program and are convinced it has been a major factor in all aspects of her continued recovery,” says Tom. Jeanne looks forward to working with the outstanding interns that assist with her exercises because they have been instrumental in giving her a customized program  where she  can gain the stamina needed to walk and the strength needed to use her right arm.  The interns work with her one-on-one to develop exercises that fit her current situation as it changes over time and they coordinate with her physical therapy.  “I have watched her improve as she has been in this program and I am convinced that it has been a life-saver for Jeanne.  As she physically improves and sees the positive changes in her recovery, we have also seen improvement in her outlook, speech and cognition which seem to be linked together.”

A key to Jeanne’s improvement has been setting small goals and measuring progress towards them.  Before coronavirus quarantining, Jeanne could walk to the car after exercise class and walk the 75 yards from the car to speech therapy.  During quarantine, Jeanne is doing therapy by video conference.  But she expects to start walking and exercising again when the class reopens.  The next goal is to walk some of the neighborhood sidewalks and Jeanne and Tom have targeted the end of September for this goal.  “If you rest, you rust,” says Tom, summarizing their approach to their new life after brain injury.