At 20 years old, Brady suffered an anoxic brain injury, where brain cells die from lack of oxygen.  After six weeks in a coma, he opened his eyes, but could not talk, let alone stand.  While he was able to regain his speech he was restricted to a wheelchair.  Brady’s first big challenge during therapy was to stand. The process of getting himself up was excruciatingly painful, leaving him in tears during many sessions.  Once he could stand, he began relearning how to walk with assistive devices and braces, which proved even more challenging. 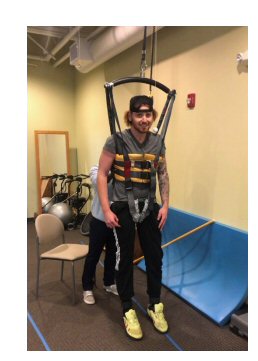 Even though he was still working on walking and improving his functional abilities, Brady was discharged from therapy after only three months, left to somehow continue improving by himself.  Brady’s mom heard about SLI’s Neuro-Fit assisted exercise program, which provides brain injury survivors hands-on assistance, an accessible facility, adaptive equipment, and affordable fitness.

When Brady’s mom learned about the SLI Neuro-Fit program Brady quickly joined, dedicating himself to fitness class three days each week, open to trying anything and everything that could help him reach his goal of walking and living independently. Through hard work and assistance from Neuro-Fit trainers, Brady’s legs have become stronger, he is increasingly more confident, and has become more social.  He was even able to move into his own apartment.  His Neuro-Fit program was specifically created to meet his goal of walking unassisted, improving his balance, and functional activities.

Since he started in Neuro-Fit, Brady’s walking stride, speed, pivots, turns, and balance/coordination have all improved.  He continues to build strength in his lower and upper body.  Brady remains one of the most motivated and strong-willed individuals in the program, demonstrating to others what determination can do.